It was a Tuesday morning like any other, back in 1988. Paul Kotz, Ph.D.,had been washing windows when he heard a homeless man across the street yell, “Hey, you!”

Dr. Kotz came to know the homeless man as Joe, and from that encounter, their friendship grew until one day Dr. Kotz found himself playing cribbage with popcorn kernels in a dumpster that Joe called home. When he first climbed down into the dumpster, Joe offered to share a banana with him.

Dr. Kotz’s interesting tale about finding grace in the most unusual of locales was recently featured on the nationally syndicated radio show “Our American Stories,” hosted by Lee Habeeb.

In the 8-minute segment, “Playing Cards in a Dumpster,” Dr. Kotz, who serves as a core associate professor in the Ed.D. in Leadership program, explained how he began engaging in conversation with Joe while working as a volunteer at the Holy Family House in midtown Kansas City, Mo., in 1988.

As Dr. Kotz learned more about Joe and his situation, he developed both a sense of gratitude for the blessings in his life and a list of questions of how he would cope with the same daily challenges that his newfound friend faced — like the possibility of a trash compactor hauling away all of his personal possessions every Tuesday morning.

“This was a moment of grace in my life, a wake-up call, an awakening to a world that I never knew nor previously wanted to see,” Dr. Kotz narrated in the audio segment, which was recorded on the Twin Cities Campus with the help of Bob Andersen, director of instructional technology, and his team.

“This was a moment of grace in my life, a wake-up call, an awakening to a world that I never knew nor previously wanted to see.”

“I will never forget that man’s generosity, who offered his temporary home, part of his sustenance, a game to play, his creative adaptation of life, and his daily appreciation of the moment,” Dr. Kotz’s narrative concluded.

The narrative also included a mention of a De La Salle Christian Brother named Louis Rodemann, FSC, a well-known community advocate who worked at the center.

“He taught us a lot about the things that we don’t see on the surface,” Dr. Kotz said, referencing how Brother Rodemann explained that 10% of food being thrown out in a container may be spoiled at the top, but that 90% of the food was still fine to eat.

For years, Dr. Kotz has been a loyal listener to WCCO (830 AM) as a source of news and weather. About a year ago, after having a hard time sleeping, he bumped into an edition of “Our American Stories,”, which airs in the Twin Cities Tuesday through Saturday from 1 to 2 a.m. He was taken by how all of the stories revolved around the idea of redemption and seeing the bright side of any situation. His mind drifted to his encounter with Joe and he realized he wanted to submit a story.

“He had the courage to reach out,” Dr. Kotz said. “A lot of us don’t. We avoid those situations like the plague instead of embracing them, because there’s danger involved sometimes. For me, I was just a volunteer, and I said, ‘Ah, what the heck, I’ll just go over there.’ But I didn’t realize that he actually had two chairs, a makeshift table, and a blanket.”

The story is just one of several that make up the book Dr. Kotz published in 2018, “Something Happened Today: A Collection of the Unexpected,” as a way to inspire his two daughters, who are now ages 29 and 31. The book focuses on the miracles and goodness people can come across in their everyday lives, by sharing the ones that have provided color to his own. He started writing the vignettes about 18 years ago before finally deciding to gather all of them together to form the book, which was published by Outskirts Press.

“I thought because my daughters were really young, maybe they could see a different side of their dad that they didn’t get to see as infants. So that’s how it emanated,” Dr. Kotz said. “And then after that, it just became ‘look for the good’ because sometimes we’re human ‘doings’ instead of human beings. Sometimes you have to break the ice with people because we get so inundated with our daily tasks.”

“Volunteering is really important to me. You can be a teacher or professor or business practitioner, and sometimes you can lose sight of everyday humanity. It keeps me grounded.”

He hopes to have a second book published through the same press later this year: “Profiles in Kindness: Stories of Servant Leadership and Inspiration.” Joe’s story is also featured in that book as well, Dr. Kotz said.

Dr. Kotz has been teaching in a full-time capacity at Saint Mary’s since 2013, the same amount of time he has served as a volunteer on Wednesday mornings at the Minneapolis Veterans Home, a nursing home for veterans near Minnehaha Falls. In that capacity, he pushes those in wheelchairs from the nursing station to their physical therapy appointments.

“Those individuals inspire me. And it’s helped me to really grow and change as a person,” Dr. Kotz said. “Volunteering is really important to me. You can be a teacher or professor or business practitioner, and sometimes you can lose sight of everyday humanity. It keeps me grounded.

“It was always instilled in me from an early age that you have to give back. You’ve been given gifts, and you need to utilize some of them for service — if not all.”

Featured image: The radio program “Our American Stories” created the above graphic to accompany Paul Kotz story, “Playing Cards in a Dumpster,” which aired on Jan. 29. 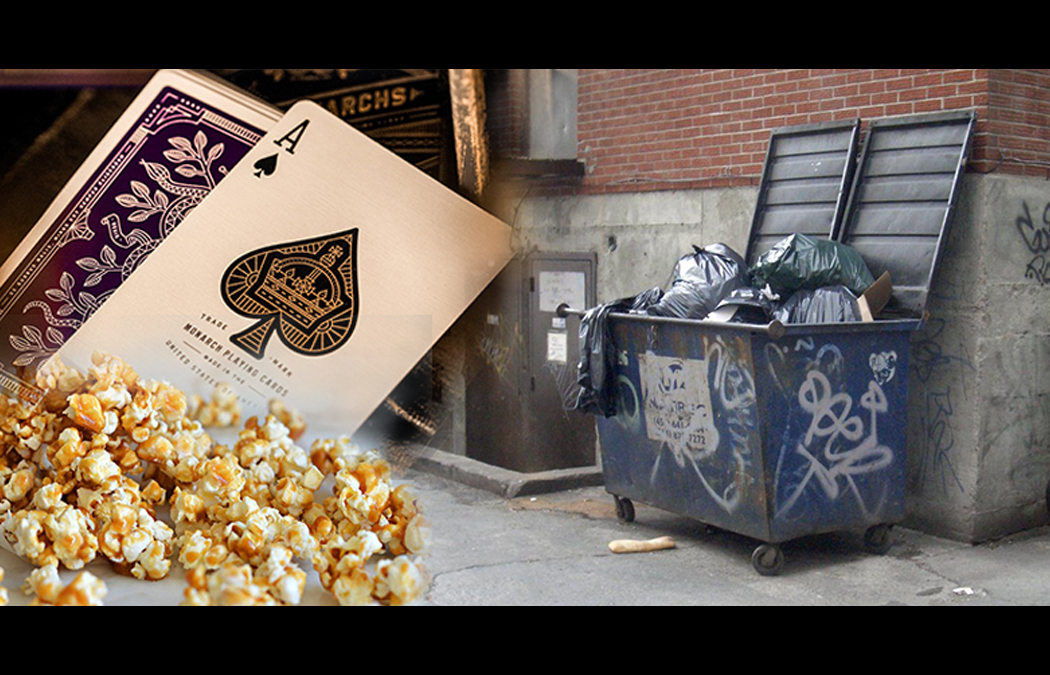