Saint Mary’s Reunion Weekend brought more than 450 alumni and friends home June 20-23. And though some alumni hadn’t visited the Winona Campus for a few years — or even a few decades — conversations picked up right where they left off.

It was an emotion-packed weekend.

Alumni tipped their heads back in laughter as they recalled stories from decades ago. Alumni squealed with excitement at seeing friends they hadn’t seen for too long. Alumni dabbed tears at the veterans ceremony and in memory of classmates they have lost. And they stood with pride as they fervently applauded fellow alumni being honored for their vast and significant accomplishments.

In addition to it being a heartfelt reunion, Saint Mary’s also recognizes those individuals who best represent Saint Mary’s mission — alumni who, by example, live ethical lives of service and leadership — during this annual celebration.

Jerry Colletti ’69 has made it his business to be successful — and to help others find success in business. He now is sharing the skills he acquired working for international businesses, and in his own management consulting businesses to help Saint Mary’s Business Advisory Board. He has helped top executives increase their sales effectiveness and was recognized as an Entrepreneur of the Year nominee/finalist by Ernst & Young, LLP. Now retired, he has co-authored over 200 articles and four books.

Mike Morsberger M’97 is an accomplished advancement professional with 30 years of experience in nonprofit fundraising and development. He has been a part of highly successful — and often record-breaking campaigns — for University of Central Florida, Johns Hopkins, and George Washington University in Washington, D.C., where he oversaw their $1 billion campaign and helped to secure the two largest gifts in university history ($50 million and $30 million).

Dr. John Domanico has supported his alma mater in multiple ways throughout his life, serving on the Alumni Board, the First Generation Advisory Board, and on the Board of Trustees. He also co-chaired the Celebration of Excellence event in Chicago. He and his wife, Joanie, have generously financially supported many university initiatives. John developed the idea to start Lasallian Day of Service 10 years ago, and, because of his vision, hundreds of alumni from throughout the United States have gathered together in service to their communities. 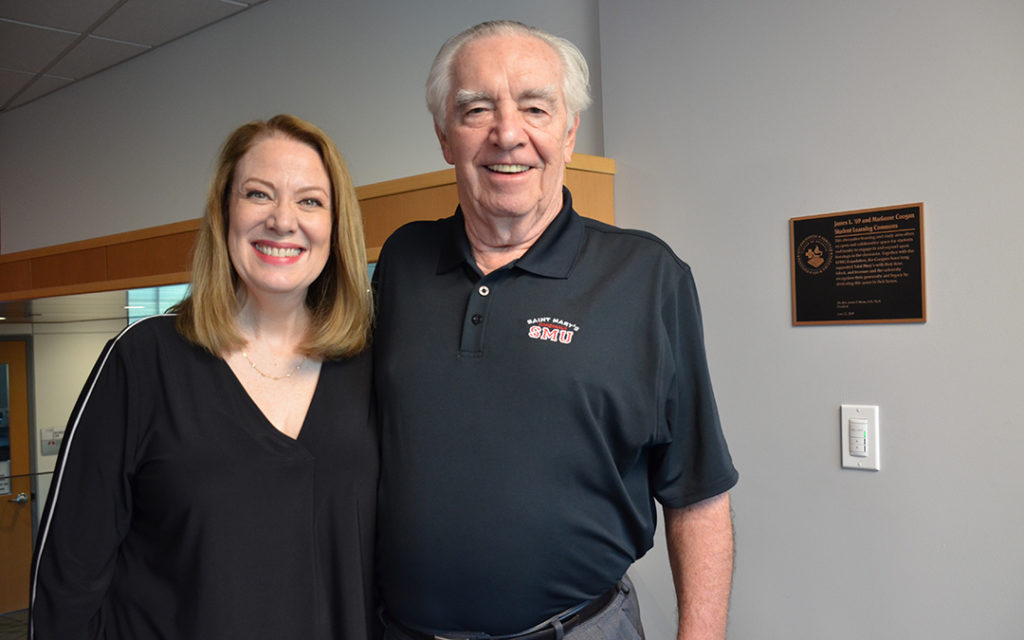 Several others were also recognized for their generosity.

The James L. ’69 and Marianne Coogan Student Learning Commons in the Science and Learning Center was named Saturday in honor of a couple who — along with the KPMG Foundation — has long supported Saint Mary’s with their time, talent, and treasure. Jim Coogan has served as a university trustee, and the couple has financially supported many university initiatives.

The Class of 1969 — in addition to announcing its cumulative giving level (since graduation) as $1,125,000 — surprised classmate Tony Piscitiello with a $50,000 gift to the “Piscitiello Endowed Scholarship Fund” for the First Generation Initiative in recognition of his 50 years of dedicated service to the university.  Piscitiello has served the university for more than 50 years in multiple capacities including: admission counselor, vice president for admission, executive vice president, and senior development director.

Later Piscitiello was surprised with another honor as the Anthony Piscitiello ’69, M’82, AFSC Welcome Area was dedicated in the Admission Office of the Hendrickson Center. The room naming recognizes the tremendous impact he has made on generations of Saint Mary’s alumni, parents, and friends throughout his career in recruiting students. 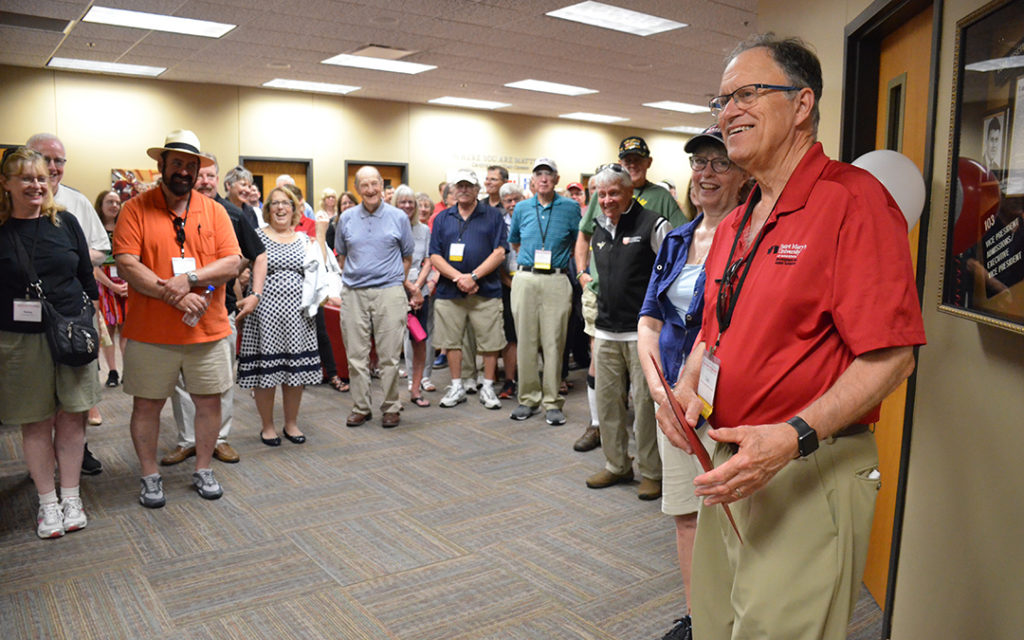 Alumni enjoyed campus and trail tours, took a boat ride on the Mississippi, visited the Minnesota Marine Art Museum, and sang along with the Oldie Moldie All-Stars (a student-led music group) as well as a hip reunion band of alumni. After alumni received an update on current university news, a special ceremony honored our alumni veterans, and a three-plane flyover in missing man formation was arranged by Retired Capt. Tim Tyre ’69. Some classes took over downtown Winona for small reunions, others convened on campus, but alumni of all ages converged to Saint Mary’s Park for the traditional reunion picnic, at the site where Saint Mary’s University first began in 1912.

Make plans to come to next year’s reunion June 27-29. Don’t miss an opportunity to tell those old stories and make a whole lot of new ones!

View photos from throughout the weekend. 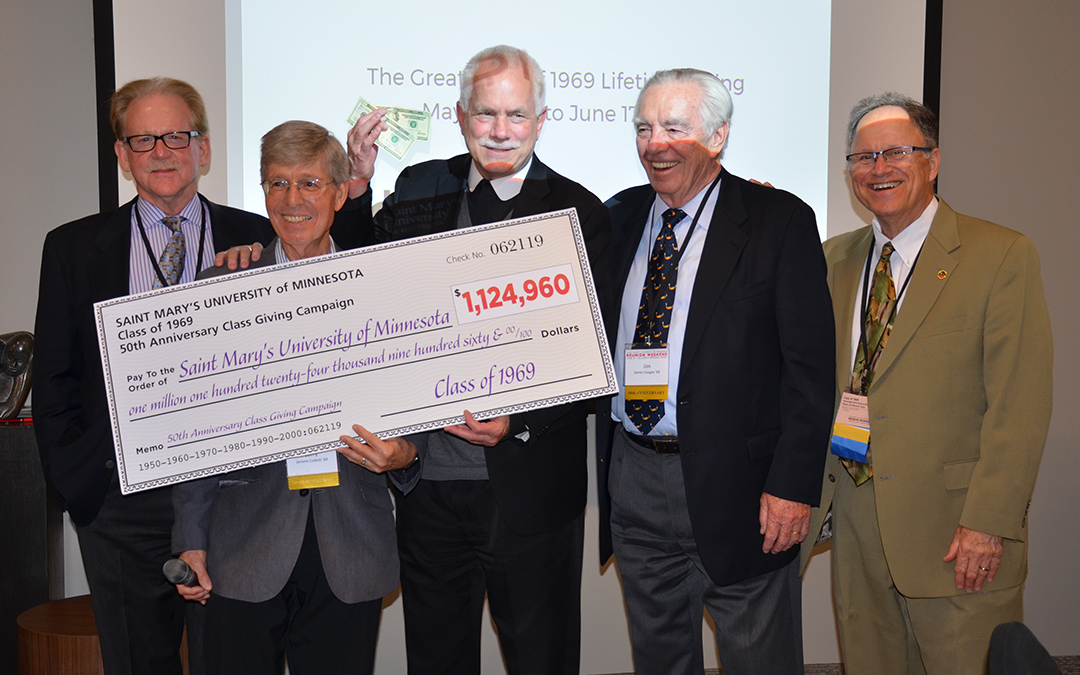